I’ve been part of a completely distributed team on a fantastic, very large scale project. We have team members anywhere between Germany and California, stakeholders in New York, and a lot of moving pieces. We’re coming up on the midway point and we’re making great progress. However, when communicating almost exclusively virtually it’s easy to lose perspective and forget that humans are making this all happen. Then, we heard about Matt Andrew’s experience with GitHub selfies to improve team morale. And you know what? It’s a great idea.

We had been using the “Ship-it squirrel”, like so:

and we still do, in fact – especially in chat. However, reviews have gotten… more interesting. Peter waited for the build to complete…

… while I examined the code.

Passing code and functional reviews is a time of celebration. Peter gives a thumbs up…

Matt gives a V for victory…

And I hit the shipit horn. 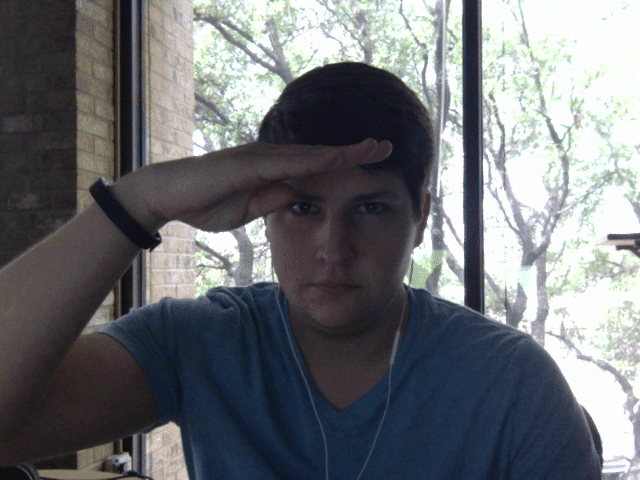 Chris knocks out some great code (as always).

Honestly, this approach has brought a light touch to a routine that can be harrowing. Using visual imagery like this emphasizes the fact that humans are participating in this process, and humans are more than just words on a screen.

The selfies aren’t the only way to capture these… human moments. Previously, Matt had written a tool a while back that could make quick animated gifs and upload them to Amazon S3 from the command-line as part of his public dotfiles project. I wrote a variation that used Imgur.com’s API instead, if that’s your thing. We use them to add to our chat conversations.

This type of benefit reminds me of experiences I had working with distributed international teams, prior to the ubiquitousness of video chat. We wouldn’t have stand-ups or regular meetings; there’d be a lot of emails and text chats, and it’s very easy to lose semantic meaning when you can’t read someone’s body language. You can’t read body language or tone from text, so knowing if someone is having a bad day or is trying to be funny is a challenge. Communication dramatically improved after the team got together in person for a few weeks and got to know the human being behind the screen name.

While it can be impractical to get everyone in a room, visual communication goes a long way. Less than a decade ago, it meant getting on an airplane for a day. Now, we can get on a group video chat or send silly animated images to each other. Doesn’t replace the need to go out to dinner with your team, but it does make the day-to-day a lot easier.

We don’t mandate the use of GitHub selfies or animated gifs; it’d be like Office Space and minimum pieces of flair, and that’s not how we roll. With that said, seeing a friend give a thumbs up or doing something silly always brings a smile to my face, and I can deal with it.