Making a Performant Photoblog with Lightroom, Jekyll, and Gulp

In middle school, I eagerly sweet-talked my Dad, who still maintains that computers are a fad, into helping me acquire a “domain name.” It was the start of a long journey into web development, design, and a photography hobby. Sometime in college, I stopped maintaining that first site, but I kept the unused domain parked and paid for because I couldn’t let go of what it meant to me. This summer, I decided to put it back to good use.

A Playscape for Photos and Tech

I wanted to build a simple, personal place to post a bunch of photos and some written content that was easy to update. Like before, I also wanted it to be a place to experiment with different techniques and tools. But since this isn’t 2002 anymore, no Dreamweaver or Flash this go’round…

I use Lightroom to organize and edit my photos, but they’re all stored in dated and named folders (e.g., “2016-08-18 Colorado Vacation”). That hierarchy would make it easy to store them on the web, too. I wanted a way to use Lightroom’s Publish functionality to make resized exports of originals that maintains the directory structure. Jeffrey Friedl’s Folder Publish plugin accomplishes exactly this.

I add images to the aptly named “photos to include” collection that Folder Publisher provides, and Lightroom automatically handles making new folders of converted and resized JPEGs, maintaining that original structure: 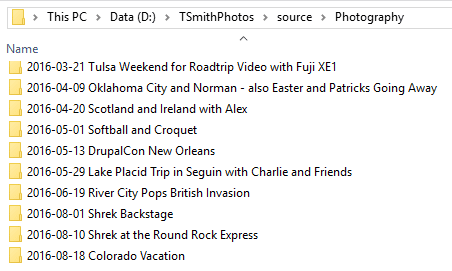 Using SourceTree, I commit the parent directory to a Git repository: 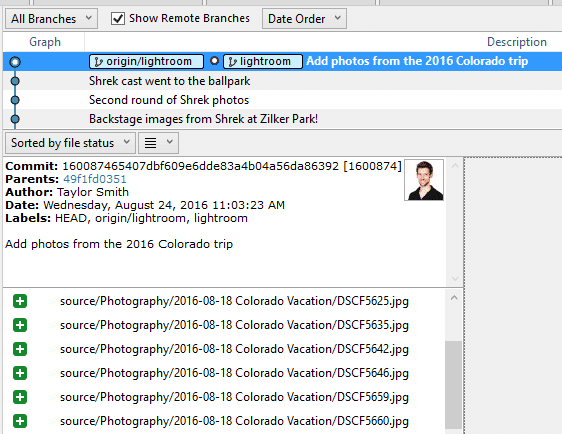 Image Processing and Indexing with Gulp

Once I have the exports from Lightroom, I have a couple custom gulp tasks to handle the logistical needs of indexing and optimizing these images for the site build.

I want the images to appear with very high quality, but the JPEGs from Lightroom are bigger than they need to be. I use a gulp task called photos to automate the processing steps.

Another task indexes all the images by collecting image sizes and their EXIF metadata, sorting all of it by exposure time, and then storing it in a YAML file so that galleries can be built automatically. 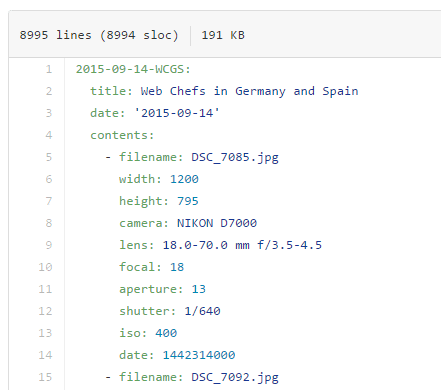 Finally, another task creates a new post in the site for any folder that doesn’t already have one, since my post and directory names are built the same way. 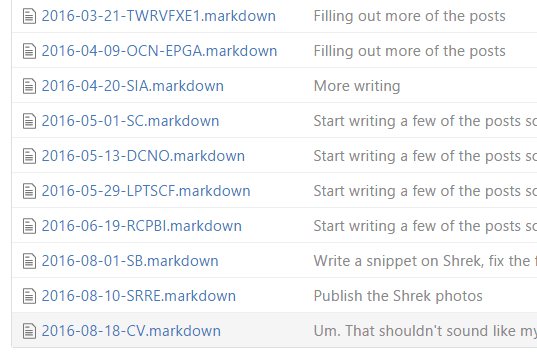 Other gulp tasks build out the Sass into stylesheets, aggregate/minify/lint JS, and copy other files directly into the _site output directory.

Jekyll (and the Liquid templating engine it uses) allows for a lot of flexibility without writing custom Ruby plugins if you’re willing to dizzy yourself with a few nested for loops and use custom site data files.

With so much of the asset processing and indexing for this site already done by Gulp tasks, the Jekyll configuration is is quite simple and is focused only on generating HTML pages. Jekyll reads the YAML index file that gulp made into the variable site.data.index when it starts building the site. A for loop over site.data.index[gallery] (where gallery is the directory name) returns a hash (similar to an associative array) with each image and all the metadata generated. I use this loop to create a list of thumbnails and links: 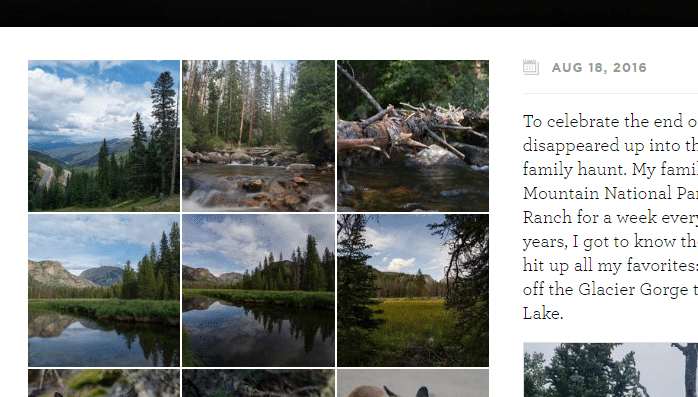 Finding individual images can get a little hairier, for example, when trying to find the “hero” image for a given post. Rather than being able to lookup an element of the hash by one of its properties, Liquid requires looping over all elements in the array until you find what you want because Jekyll’s where filter doesn’t seem to work on custom data. In this case, looking for an element marked hero. Adding both techniques together and nesting them in a loop of all posts in the site is how the home page is generated: 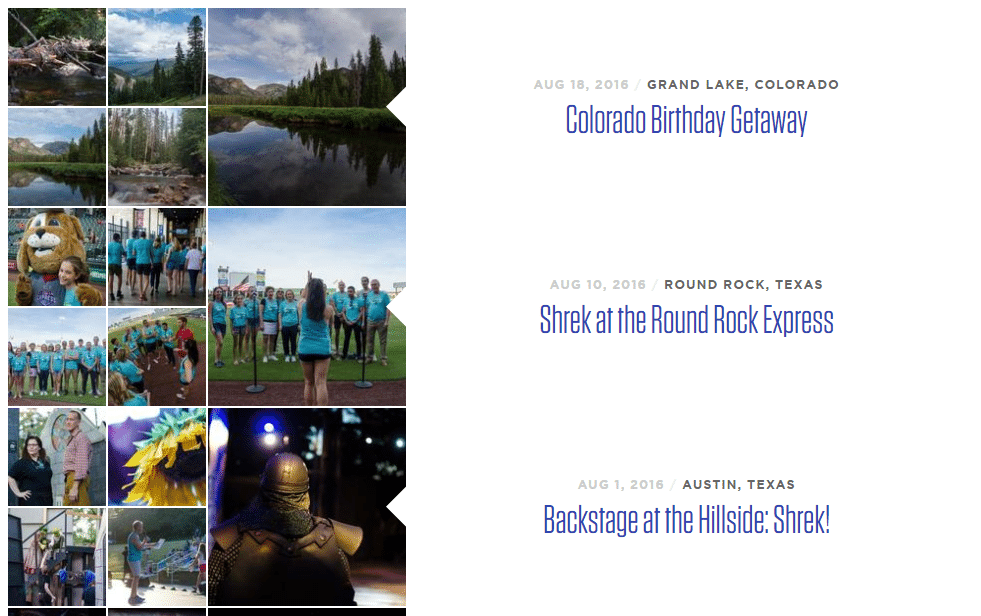 Even with big photos saved at high quality settings, I wanted to prove this could still be a fast site.

PhotoSwipe is a fairly lightweight gallery plugin with no dependencies, but I can reduce JS weight further by only loading PhotoSwipe when it is needed.

Add “photoswipe: true” to the front-matter of the Post template.

Although this site doesn’t wait until images are in-view to load them, it does skip loading most images until the rest of the page has been downloaded and parsed. Although there are many libraries to make lazy/delayed loading of images easy, it’s also very easy to do on your own. David Walsh explains the effect over on his blog.

Similarly, for the masthead/hero images, I load the “medium” size first because it is smaller (stashing the full size URL in a data attribute). Then, only if the window is large enough, do I swap to the full size. Unlike the lazy loading, this swap is tied to the load event, so the browser will wait on this until everything else is loaded, handling this last.

To get content on-screen fast, I load webfont and icon CSS in a non-render-blocking way. Filament Group’s LoadCSS is my go-to library for loading CSS asynchronously, but recently they have encouraged using the library to polyfill the new rel=”preload”, a link tag type which is specifically intended to load asynchronously, though support is currently limited.

All JavaScript is already in the footer, but it is also marked for deferred execution so it can be downloaded in parallel but still executed in order.

Minifying/compressing assets and then, at least in a still largely HTTP1.1 world, aggregating them to produce fewer requests is an easy best practice with gulp. The Four Kitchens Frontend Performance Training repo has lots of examples and explanations for these techniques.

From there, I minify all HTML output using a final Jekyll layout by Anatol Broder, which gives me the minification without needing a separate Ruby plugin to do that. Finally, I set up browser caching and platform-independant ETags with htaccess files to make as many downloaded assets and pages re-usable as possible.

The most important part of maintaining a performant site is monitoring I can monitor performance metrics and watch for changes with WebPageTest (my personal favorite that Chris Ruppel explained thoroughly on the 4K blog), Google PageSpeed Insights, and YSlow.

Sure, a myriad of services from Flickr to Instagram to 500px offer photo hosting, but I think side projects are the best place to learn new techniques and stay sharp. Performance is a key component to a positive user experience, and with the simplicity of a static site generator but the challenge of webfonts and photography, I set out to prove there was an efficient way to combine the needs of both with tools and techniques that could work for your site, too!