Four Kitchens had previously worked with the NYU Rory Meyers College of Nursing, creating the first mobile-responsive version of their existing Drupal 6 website in 2014. While the previous site was more than capable “back in the day,” the needs of the site’s current visitors and administrators had outgrown the technology.

NYU wanted a new online experience that was as modern as their user base, admin friendly for a diverse range of content, and leveraged the speed and responsiveness of Drupal 8. Partnering with Four Kitchens this summer, both teams set out to develop the brand new Rory Meyers College of Nursing site. Throughout the project, I served as the Project Manager/Numbers Guy/Scrum Master/Group Therapy Facilitator/Product Owner/Bad News Guy.

“First founded in 1932, the NYU Rory Meyers College of Nursing is the second-largest private university college of nursing in the US, and reflects the intellectual curiosity, dynamism, and quality characteristic of NYU.”

As the quote from their About page says, NYU College of Nursing understands change. Starting as a department, then growing to a division, and finally being established as an independent college, growth is in the DNA of the College of Nursing. Despite the relative newness of Drupal 8, it was the platform the college had been waiting for and they wanted D8 to serve as their foundation for future growth. Throughout the project, NYU staff and our team had three primary goals for the new site:

Modernize the site to reflect the current user base

From prospective students looking for admissions information on their iPad, to a professor keeping their research publications up to date on their desktop, to alumni finding an event on their phone, the new site had to offer the same delightful experience across a variety of platforms. Speed and efficiency were also top of mind as well, as the site had to perform on both wired and limited bandwidth platforms. 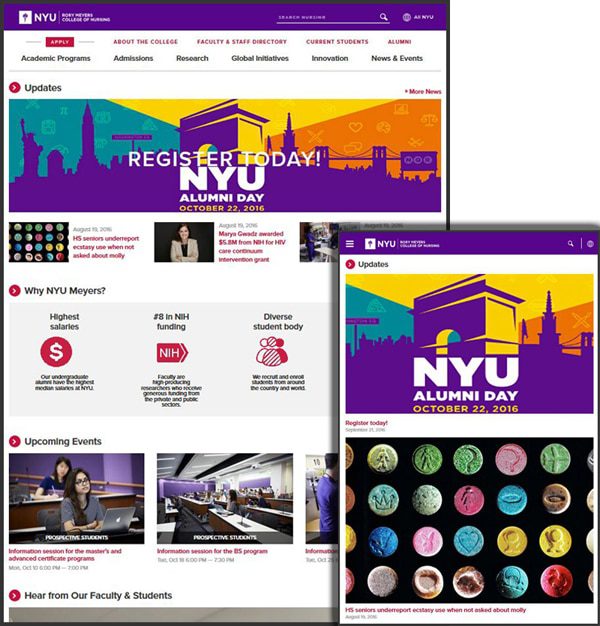 Make the site administrator friendly, allowing a wide variety of content to be edited by non-technical administrators

In a field as diverse as medicine, making complicated content easy to find (and edit) was of critical importance. College of Nursing staff needed the ability for specific areas of the site to be managed independently, without lengthy trainings or complicated technical workflows. The team used Drupal modules such as Focal Point, Paragraphs, and Scheduled Updates in order to reduce the workload on both developers and content administrators. 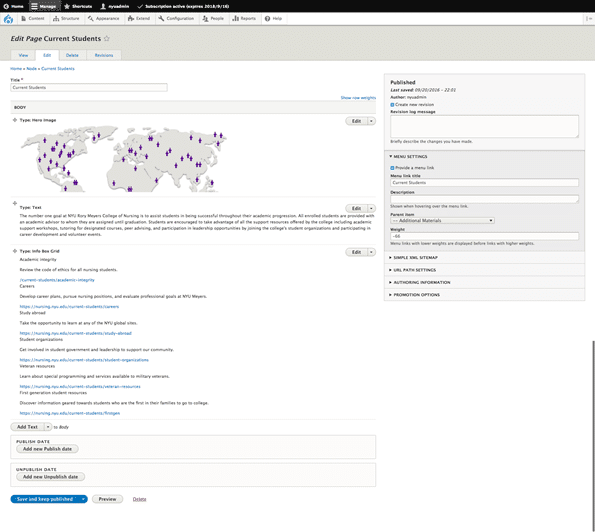 Already sold on the advantages of a Drupal platform, NYU was looking to D8 to serve as its technology platform for years to come. Responsiveness, speed, and modular design and styling options were just a few of the features that were important to staff. Knowing that other programs or colleges may also come to benefit from the technological advancements we were building into the College of Nursing site , the Four Kitchens team developed the project with a component based theming* approach, and utilized PatternLab to create a living style guide. When appropriate, these components can be re-used or re-skinned for future site sections, or even for additional NYU global sites, saving both time and money on future projects.

As a project manager (and entry-level product owner), I could not have asked for a better team. It’s a clichéd cliché, but successful projects always come down to communication—whether the situation was lighthearted (“Let’s just assign that story to Brian, since he’s on vacation today.”) or serious (“Well, plans A through E didn’t work, but I have a great feeling about F…”), our entire group communicated regularly (every day through Slack and Zoom video conference calls) and honestly (the good, bad, and the ugly). At the end of the project, we all felt like we had truly been through the wringer together. We’re not just a customer with specifications, and developers cranking out orders, but an actual team, with diverse perspectives, skill sets, and roles that pulled together to accomplish a formidable task.

Not to toot our own horns too much, but in the words of Todd, “Honk-Honk!” The new site launched on time, on budget, and without any major technical issues, thanks to the hard work of the NYU College of Nursing team and the web chefs.