Towards the end of February, I had the chance to attend the Lesbians Who Tech Summit in San Francisco.

Lesbians Who Tech is an organization of women who identify on the LGBTQ specturm, whose goal is to promote visibility and help strengthen the professional networks of Queer Women in the technological workforce. This was my second year at the annual Summit, which attracts LGBTQ women and allies in all roles—UX, PM, PO, developers, engineers, HR, CTOs, CEOs—across the tech industry.

I really loved hearing about new and transformational technology, especially around the democratization of education, and Ramona Pierson, who works in that area, gave an incredible keynote. After being hit by a drunk driver, she was saved by technology that her doctor used, which was not approved by the FDA. She lost the ability to see but that never stopped her from being a lifelong learner and innovator. Most recently, she co-founded Declara, an online social learning program that helps managers identify the unique strengths of team members. 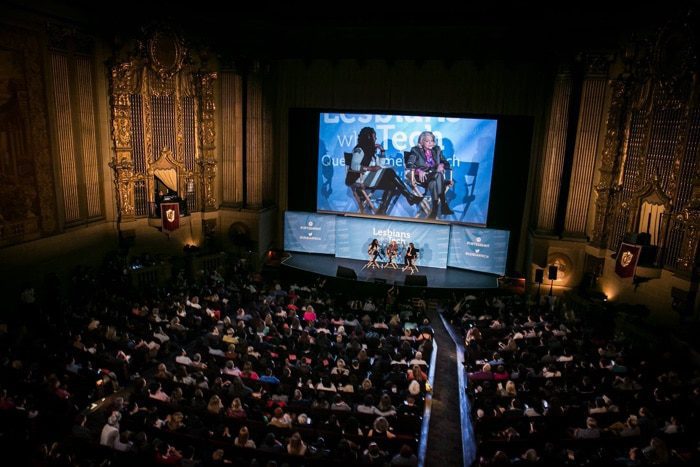 I also enjoyed hearing about IOT—the Internet Of Things. There were a few speakers talking about IOT, which is a personal favorite since I’ve seen its slow crawl into the mainstream via the anticipated 5G revolution and remote drone technology—a technological revolution that I can only dream about and/or fear. On Friday morning, Gabriella Levine from GoogleX explained how robots can change the world, detailing current advances in tech that marry robots, radar, sensors and more. I loved that Gabriella talked about the ethnic diversity of her team, and how that leads them to be not only more innovative, but also more prone to take risks.

“Most companies don’t even know that by keeping the boardroom white and male, they’re missing out on incredibly bright people.”

That afternoon, Megan Rose Dickey gave a talk on what she calls the “Kinsey Scale for Diversity”. I particularly liked how she called out companies for creating “diversity and inclusion leaders” who weren’t all that diverse. As people have become more attuned to intersectionality in the workforce, we’re learning to recognize that cis gay men—because they can pass as straight men—still enjoy many of the privileges that LGBTQ women (be they cis or trans) do not. As Megan pointed out, companies want to be inclusive and diverse in their hiring, but their commitment to inclusion has been largely nominal. Even though Tim Cook, the CEO of Apple, is openly gay, the company has been routinely criticized for it’s lack of diversity, especially in top positions.

An LGBTQ identity can cross and intersect with many other categories of social identity, leading to different issues being faced by, for example, cis gay men, white LGBTQ women, and queer women of color. Lesbians Who Tech is an all female organization and half of the women speaking at the conference were queer women of color. I heard and saw voices from all parts of our community and it felt whole. When I looked at that room of women and leaders in technology, I saw a room of women that companies should fight to hire and keep. Most companies don’t even know that by keeping the boardroom white and male, they’re missing out on incredibly bright people; these businesses will eventually fade away because they were comfortable with a status quo rather than investing in innovation and creativity among their workers.

We talk about innovation everyday in technology, but to encourage innovation, you need ideas borne of minds that do not think the way you do, and voices coming from people who have different lived experiences than you do.

Lesbians Who Tech took place in San Francisco, February 25-28, 2016. You can see the full agenda here.