We’ve shifted from ‘going online’ to ‘being online.’ What’s next?

I was one of Those Kids: a bored suburbanite with a private phone line and computer in his room. I would talk with my friends at all hours, pull some *67 pranks, and occasionally abuse the emergency breakthrough service. Then, around 12 or 13, I got a modem, and everything changed. 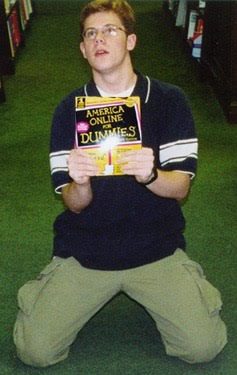 It all started with BBSes. Back then, in the mid-1990s, BBSes would advertise in the classifieds of alt-weeklies like the Dallas Observer. It seemed like any and every kind of subculture or group had their own BBS: Dungeons and Dragons, amateur ufologists, Cult of the Dead Cow. BBSes were the portal to a magical, hidden world that seemed custom-made for me. After wrestling forever with Windows 95 and HyperTerminal—and several annoyed calls to my friend Brad, who always knew way more about drivers, serial ports, and IRQs than anyone else in the room—I finally signed on to my first BBS. After a few minutes of bumbling around in the command line, the screen blanked out. A moment later, I saw: YOU ARE NOW IN SYSOP CHAT. I was now chatting in real-time with the sysop—the person in charge of the BBS! A real-life celebrity! My mind was blown. This was amazing.

In those days, there was no such thing as “always on.” There was a phone, hooked up to a computer, dialing another phone, hooked up to another computer. And because most BBSes only allowed one user at a time—most BBSes were run out of bedrooms like mine with a single private line—they had time limits. So I quickly learned that if I stayed home sick from school, I could connect to BBSes during the afternoon when no one else was trying to dial in. Those afternoons playing hookey would be my introduction to digital culture: playing in MUDs, searching for coveted downloads like hacker mags and shareware, talking with random strangers in asynchronous chat rooms. I was just poking around, but those screens filled with little more than text were everything to me at the time.

Then came Excalibur BBS: a BBS with a full graphical user interface. Images, links, a chat system that resembled email—these were webpages, but with a BBS’s soul. And that was my introduction to the web. Thanks to Excalibur, I realized that I was missing out on this whole other thing: the web. A BBS, but… giant. Countless users, virtually unlimited connections, global. Unlike many of my friends, I never used a packaged provider like AOL, Prodigy, or CompuServe. I avoided these corporate Walled Gardens, preferring the raw web to the awkward visual metaphors of “cybertowns” with “Town Halls” and “Post Offices.”

The first website that I really fell in love with was ScottLand, Kids in the Hall Scott Thompson’s personal website. When I “applied for citizenship” (that is, created an account), I was emailed a certificate of naturalization, and I joined a community. An elite group of people like me who knew who this guy was, knew why he was funny, and “got it.” It made me feel welcome and connected to a larger whole. The web had grabbed ahold of me and it never let go. 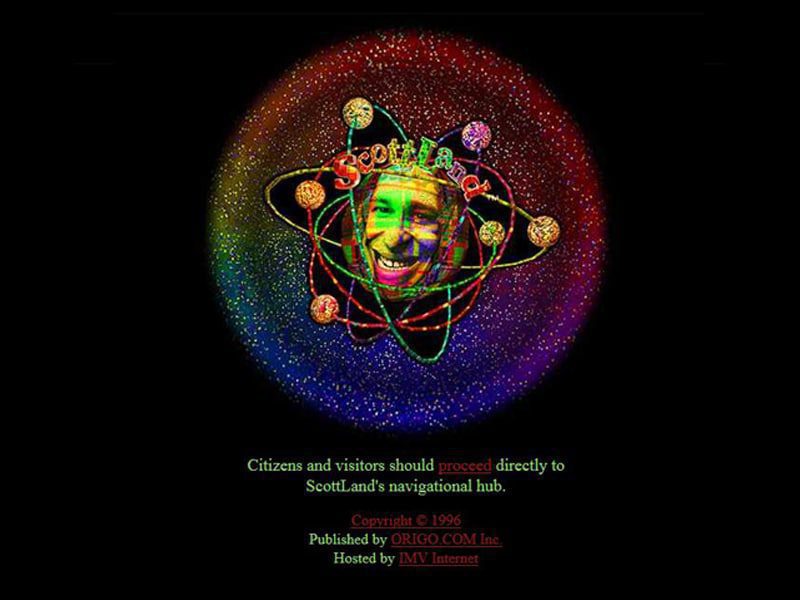 But simply using the web wasn’t enough. I wanted to help create it. I signed up for GeoCities—my address was in the Area 51 neighborhood, naturally—and built an obsessively researched UFO conspiracy site. Later, one of my high school English teachers paid me a few bucks to build a site advertising her tutoring services. And like internet technology itself, these changes all happened super fast. I went from that first sysop chat to making my own website in six months.

Twenty-plus years later, I’m the CEO and Co-Founder of a company that makes websites. Professionally! People pay me to talk to them about how to “be” on the internet. But although I work in the web—I study it, critique it, and help build it—I don’t really use the web anymore. Sure, I use email, search engines, and streaming services, but those have become utilities like water or cable TV. I’m online because everyone is always online. I pay my bills online. I do my banking online. I do most of my shopping online. But I don’t “go online” like I did when I was a kid. Why not?

There’s a trend that bothers me, something I find fundamentally disturbing about the direction the web has taken over the last ten years or so. I used to have a workflow: Every day, I’d visit a bunch of webpages and blogs to get my news, kind of like getting the New York Times or Mainstreet Local Paper delivered to the house. Then along came Google Reader, and I started using that as a way to collect all of that content into one easy-to-read list. Instead of going to each website every day, I just went to Google Reader. When Google pulled the plug on Reader (boo!), my web browsing died with it. Now I get most of my news from Facebook, a curated, always-agreeable, and incredibly lame aggregator for the superbly lazy. But I keep using it because I don’t have time to find another solution. A decade or more after I deftly avoided the curatorial trap, I willingly walked into a Walled Garden (first Google, now Facebook), and I haven’t found the way out.

But I think that’s all about to change again. I think we’re on the cusp of a dramatically new way of interacting with the internet—as different as a website is to a BBS. I believe a combination of overlaid and immersive interfaces will change how we think when it comes to the internet, the web, and the notion of “being online.” What could we do with a good, non-creepy version of Google Glass: a Terminator-like HUD that helps us understand the world around us in a deeper way? What could we build if we found ourselves experiencing content and conversations in a fully immersive, three-dimensional, tactile environment? An online world very much like the offline one, but different. A world wide web that isn’t just always on, but always there as well?

I’m lucky enough to have a friend who works as a Product Manager for Oculus VR—Brad Dickason, the same Brad who first introduced me to BBSes and troubleshooted my HyperTerminal issues. Last year, I visited him at the Facebook campus to get a personal tour of what Oculus Rift can do. It’s amazing. This isn’t Lawnmower Man VR; this is a user-directed, immersive view of how we can and will connect with games, film, music, and each other in the not-too-distant future. And by not-too-distant, I mean in just a few years. The iPhone was released on June 29, 2007—fewer than nine years ago—and it completely revolutionized how we use the world online.

But “fewer than nine years ago” is an eternity in the 23-year history of the web as a whole. Technology moves fast, and it doesn’t show any signs of slowing. You need to be ready for it. And that’s what I love about the team at Four Kitchens: We all have strong opinions about the future of the internet and digital technologies. We’re very good at managing what’s happening with the web now, but we’re also interested in what’s next. Every project we’ve ever taken on, every solution we’ve ever come up with, everything we’ve done in our ten-year history has extended the boundaries of what’s possible. We started out of a tiny apartment building in Southeast Austin, four nerds building static landing pages, modeling an internet that was little more than print media on a computer screen. Now we’re an elite group of more than 30 Web Chefs, a distributed team crafting new experiences and architectures, making it possible not just to “go online” but to be truly connected.

If you want a strategic partner who considers all the possibilities, present and future, talk to us. Is your digital strategy ready for a whole new generation of devices and experiences? Are you future-proofing your content, community, and products? Are you implementing content modeling, decoupled architecture, and microservices? You should be. And we can help.